AirMap Is A Sky Atlas For Drone Users

An elegant solution to inelegant regulation

Bought a drone, and want to fly it legally, but have no idea where to do that? A new map created by drone hobbyists and enthusiasts aims to be an atlas, laying out the legal landscape for piloting unmanned vehicles. Called simply AirMap, the project is a collaboration between Ben Marcus, who created the NoFlyZone registry for people who don’t want drones buzzing around their houses, and Gregory McNeal, a professor of law and public policy at Pepperdine. Available now in beta form, the AirMap takes user input and regulation changes into account, creating a durable map of which sections of sky are currently safe and legal for drones to fly in.

It’s easier to explain how AirMap works with an example of how the current system doesn’t. If a person wanted to legally fly a drone in New York City this weekend, where do they start? Watching December’s “Know Before You Fly” PSA to figure out if it’s okay, an eager and law-abiding pilot could figure out that they should fly below 400 feet, stay within the line-of-sight, and avoid stadiums. But since that PSA was released, the FAA changed the rules, making 500 feet the acceptable norm, and they’ve granted more legal exemptions for how and where commercial drone users can fly.

Armed with this information, our hypothetical drone pilot plans to stick below 500 feet, and they want to avoid both stadiums and airports. To make absolutely sure their flight is okay, they turn to the FAA website, and see a temporary flight restriction over New York, to keep the sky safe for “VIP movement.” Here’s what that looks like:

It’s a mess of concentric circles, classifications, symbols, and jargon. The accompanying text says the restriction applies “from the surface up to and including 17999 feet” above sea level. That’s about 17,499 more feet than we care about. The same temporary flight restriction is visible on AirMap. This is how it appears there: 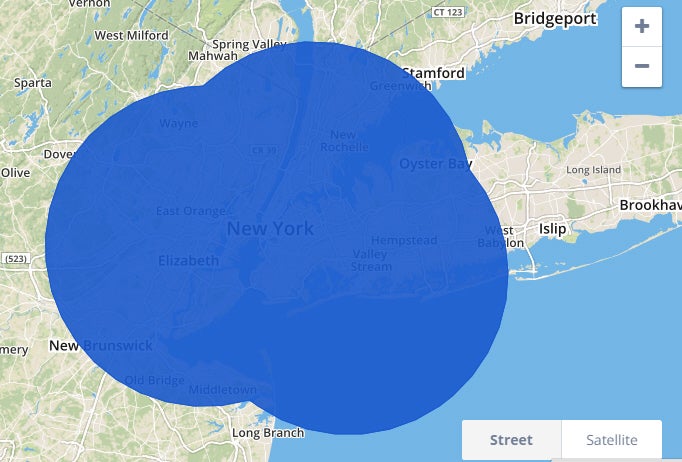 The whole area is off limits, thanks to the temporary restricted airspace (shown in blue), so our pilot diligently waits for another weekend to fly their drone.

While it’s still a work in progress, AirMap comes with several useful toggles: airports, with the option to add in private airports as well. There’s a toggle for controlled airspace, and one for caution, like the temporary flight restriction or the permanent one banning flights over the White House in Washington. And there’s an advisory option, where pilots can select private residences (built from the NoFlyZone opt-in database), schools, hospitals, helipads, and buildings they can avoid if they want to. Toggling through the other features, we can see that after the temporary restriction, and excluding national parks (where drones are prohibited), there’s a lot of other controlled airspace, as well as areas near airports, worth avoiding, but there are spots to fly a drone in New York. It just means flying them in Staten Island.

The FAA map does offer one piece of information AirMap lacks: NYC’s temporary restriction is only in effect for about 12 hours on May 4th. AirMap’s beta version isn’t yet good at distinguishing between when restrictions begin and end. 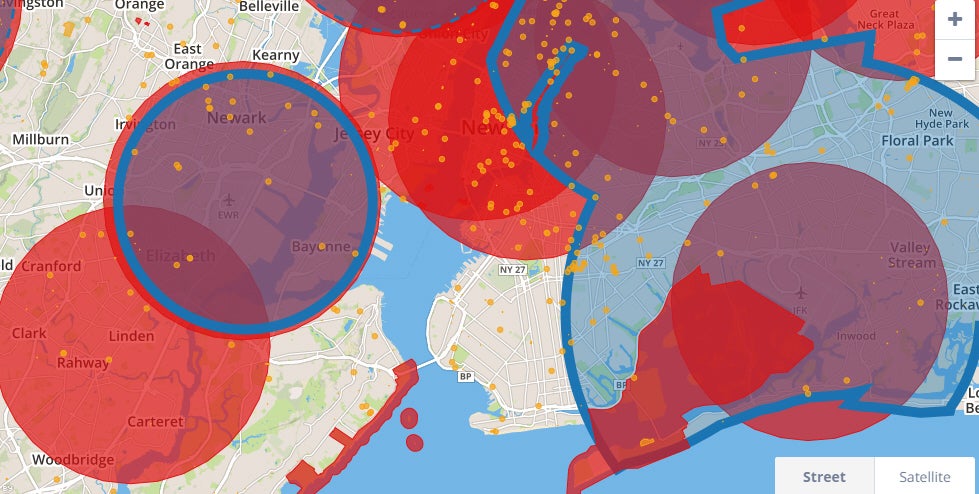 In the map above, the red circles show a five mile radius out from airports, the blue and purple boundaries are classifications of airspace, and the irregular red areas are national parks. The drone pilot can potentially fly everywhere else, though we recommend avoiding the helipads, hospitals, schools, and residences visible in yellow too.

The whole site works in a desktop browser, but McNeal tells Popular Science it’s designed and optimized for mobile, which means drone pilots can use it in the field to figure out where exactly they should or shouldn’t fly.

It’s an entire project aimed at creating a clear, useful map of the low sky. If it moves past the beta stage, it could allow drone pilots, professional and hobbyist alike, to fly only where they’re supposed to, without violating law, privacy, or risking the safety of other aircraft.