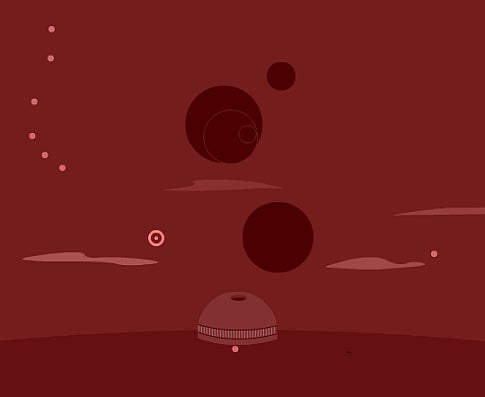 Last week, we investigated the principle of conservation of angular momentum on a spinning carousel. In this episode we illustrate the linear version of the same principle — conservation of linear momentum — as illustrated by the physics-based computer game Red. The goal of the game is to avoid being crushed by a relentless barrage of incoming meteorites, by deflecting them with cannon balls. Understanding a little bit about conservation of momentum is a consolation in the face of the reality that sooner or later you are going to get flattened.

Linear momentum (p) is defined as the product of the mass and velocity of an object. (Mathematically speaking, p = mv). According to the principle of conservation of momentum, if there is a collision between two objects, although the momentum of an individual object can change, the total momentum of the two objects added together remains constant.

All of the collisions in Red elegantly adhere to the principle of conservation of momentum. It’s important to realize that momentum is a vector which means it has a direction associated with it. Since the collisions in the game are two-dimensional we can analyze them more easily by looking at the horizontal components of the momentum separately from the vertical.

Although the game moves too fast to make any accurate measurements, if we could get some speeds and directions on these things we’d also be able to estimate the mass of those pesky meteorites (relative to the cannon balls). You can bet that those relative masses are coded in the game software along with the conservation-of-momentum equations.

If you want to contemplate a little bit of physics while trying to keep yourself from getting obliterated by a meteorite, Red is the game for you.