Who's up for a round of interplanetary golf? 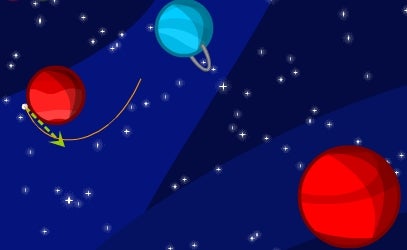 This equation describes the force of gravity between any two masses separated by a distance r between their centers. G is a constant of nature that we call the universal gravitational constant.

See it in action in this week’s online game, Gravitee.

The goal of the game “Gravitee” is to use planetary gravitational forces to steer a ball through a hoop. The creator of the game, FunkyPear, applies Newton’s law in order to calculate the accelerations, velocities, and trajectories that result from the combined gravitational forces acting on the ball. Because the planets have fixed positions, it is possible to determine where the ball will go. Interestingly, in the case where the planets are also free to move, you actually can’t explicitly solve for the bodies’ subsequent motions (when there are more than two masses). The system becomes chaotic and there is no clear way to predict what will happen over time. This conundrum is called the “n-body problem” in mechanics, and is the subject of much mathematical speculation.

Fortunately, in our simpler case, we can solve for the motion of the ball with a bit of mathematical gymnastics, giving us this esthetically pleasing, sometimes frustrating, possibly addicting game. And it’s fun to contemplate the physics.

When you hit the ball out of bounds, it means the ball must have achieved “escape velocity” relative to the planetary system. This means that, although the ball will gradually slow down, it’s moving too fast to ever completely stop and be pulled back by the planets’ gravity. The ball can travel pretty far before turning around — when it disappears off the screen for a while but eventually returns, obviously it didn’t achieve escape velocity and you’re still in play. (The scale on the side of the screen helpfully tells you the distance of the ball at a given moment.)

It’s actually fairly easy to calculate the escape velocity for the ball at any position using the principle of Conservation of Energy. It’s too bad we’re not given the initial velocity of the ball when we set up each shot: if we were, we could actually determine whether we’re hitting it too hard. When there are impacts between the golf ball and planets, we can observe another aspect of physics in action. These appear to behave as perfectly elastic collisions, obeying the principle of Conservation of Momentum.

While this is just a computer game, the physics employed is the same as that applied by NASA to predict the trajectories of spacecraft. Landing a man on the Moon requires an intimate knowledge of Newton’s Universal Law of Gravitation. Without it, we never would have been able to play golf there!