NASA wants the internet to get hype about these new exoplanets

You can basically read fanfiction about them 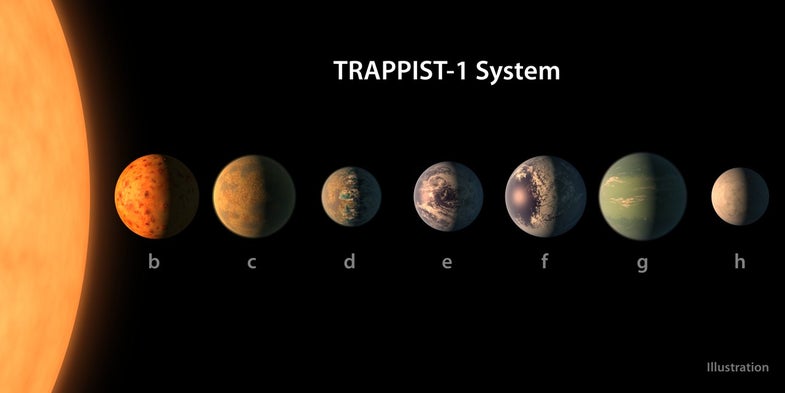 Have you heard the good news? On Wednesday, scientists announced a fleet of new planets. And not just any old exoplanets: they unveiled a solar system seemingly jam-packed with Earth-sized worlds. Those seven probably-rocky bodies could be an excellent place to search for life. And the good folks at NASA have created a whole new website devoted to the TRAPPIST-1 system. There’s a lot to unpack here.

First things first: Remember those illustrations that always got sent out with new exoplanet discoveries? The artistic interpretations based on whatever scant data we might have on the planet? Forget ’em. NASA has created a 360-degree video that puts you right smack dab on the surface of one of the newly discovered worlds. Never mind the fact that all we really know, with reasonable certainty, is that the planet in question is about the same size as Earth, and is rocky—like Earth, Mars, Mercury, and Venus—and orbits around a red dwarf star. For all we know, TRAPPIST-1d could have black sand beaches surrounded by purple oceans full of evil, hyper-intelligent jellyfish. But, like, okay, this is a reasonable guess:

If that’s not quite whimsical enough for you, perhaps you’d fancy some planetary fanfiction? NASA links to “The Terminator”, a short story capturing a slice-of-life on one of the TRAPPIST-1 planets. It hinges on the notion that the planets in the system are tidally locked; like our moon always shows the same face to our planet, one side of these worlds always faces their sun. Scientists have said that it’s possible the planets are positioned that way, with a light side and a dark side—which could make for some interesting life forms and some very weird weather patterns—but for now they’re not certain.

Another story—short, but powerful—imagines a future where the new system has become a golden land of opportunity. If these worlds are habitable, will we ever inhabit them? They may be relatively close by cosmic standards—just 40 lightyears away—but heck, we haven’t even figured out how to get to Mars yet. For now, this science-fiction is pure fantasy.

Notice the new @GoogleDoodles? It's about the 7 Earth-sized planets we discovered around nearby star! Get the news: https://t.co/G9tW3cJMnV/ pic.twitter.com/dOHB0bLqXn

If you’re too cool for short stories and whimsical videos (you’re not), the site is also bursting with all of the knowledge NASA has to share about the seven planets and their tiny star. For more details, you’ll have to be patient: scientists will continue to observe the system with space telescopes like Kepler, Spitzer, and the Hubble to find out as much as they can. When the James Webb telescope launches in 2018, it could actually measure the temperature of the planets and decipher the chemical compositions of their atmospheres. That could tell us whether the three planets that sit in TRAPPIST-1’s habitable zone actually hold liquid water.