*E. coli* Can Make Bendable Plastic For Use In Space

They could come in handy during longer manned missions 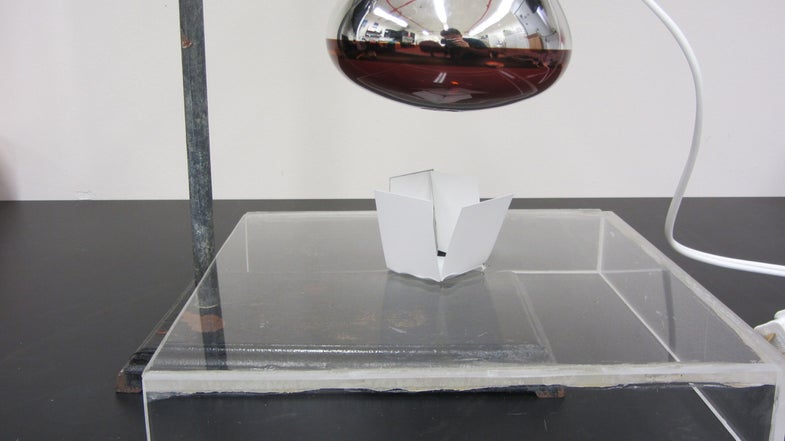 The researchers cut a polystyrene sheet into a box shape, which then folded into a box when put under an infrared lamp SB-iGEM
SHARE

Tools are not easy to replace in space. Periodically, things like wrenches and mesh safety tethers aren’t prohibitively difficult to bring to the International Space Station, but in the future, longer manned missions mean that astronauts will need a better way to create plastic when few of the typical resources are available. To solve this problem, scientists have turned to biology. A team of researchers from Brown and Stanford Universities, under direction from the NASA Ames Research Center, has genetically engineered E. coli bacteria to make flat, space-efficient sheets of plastic that can be folded into tools. The researchers presented their work at the International Genetically Engineered Machine competition this fall, as the New Scientist reports.

The researchers first needed to figure out which types of plastic best fit their needs. After melting a number of plastic food utensils under heat lamps and testing their chemical makeup, the researchers found that polystyrene worked best for folding, and the polymer P(3HB) was desirable because it is biodegradable. Then they figured out a way to engineer E. coli bacteria to create the enzymes and proteins needed to make sheets of the plastic. With the plastic in hand, they tried out two different ways to fold it. First, they drew dark lines on the plastic, which, when the plastic was put under infrared light, the dark lines absorbed heat more readily and thus melted that area more quickly. They also put spores of a type of bacteria called Bacillus specifically on the parts they wanted to fold. Bacillus spores expand and contract in different humidity levels, and bend the plastic in the process.

In these initial tests, the researchers were able to make a few simple origami tools—a box and a cup. But they envision that their work can be applied far beyond, constructing large-scale foldable structures like telescope mirrors and solar panels.

As scientists start to orchestrate longer manned space missions, they realize how necessary bacteria like E. coli will be, both for materials like these and for human health (to make our food and populate our varying microbiomes). But early tests show that bacteria can act in surprising ways in space. With so many people reusing resources (think: recycled urine) in a finite area like a spacecraft, a bacteria outbreak could make astronauts very sick, or even kill them. So, understandably, the researchers are going to need to do a bit more work to ensure that even the most helpful bacteria are well-contained and well-behaved before sending them into space.