TV on Your Cellphone

Speedier networks will soon stream TV-quality video to your cell. Here's how you'll view it 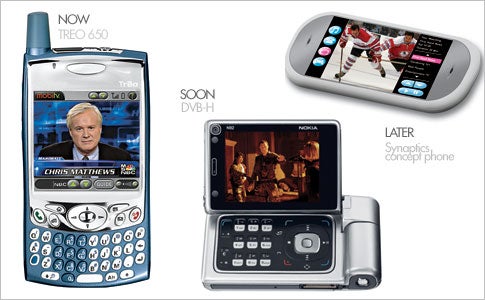 Up to 20 frames per second (fps)-4 fps slower than full-motion video.

2.5Gâ€3G Networks Boasting speeds of up to 2.4 megabits per second (almost cable-modem speed), these networks allow cellphones like the Treo 650 to tune in to TV stations or stream programming on demand. Stations are broadcast over Verizon and Sprint’s EV-DO and Cingular´s UMTS network.

Digital Video Broadcasting for Handhelds (DVB-H)
As subscriber numbers soar, 3G networks won´t have the capacity to han- dle mobile TV. To combat the data snarl, handset manufacturers are adding a TV-dedicated antenna to phones, such as the N92; and a company called Crown Castle Mobile Media is putting up DVB-H transmitters across the country.

At 1 gigabit per second, 4G networks will broadcast in high-def. To maximize network space, stations will be streamed over a dedicated section of bandwidth (the way cable TV is), or beamed on demand. Slim, single-antenna phones, like this touchscreen concept, will be able to receive
location-based news from local network servers.