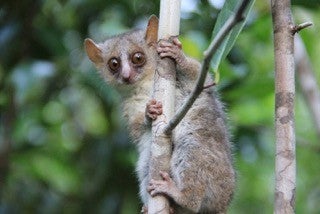 Three new species of mouse lemur, a group that makes up the world’s smallest primates, have been discovered in Madagascar.

Twenty years ago, there were only two known species of mouse lemurs. The new members—dubbed Microcebus ganzhorni, Microcebus manitatra, and Microcebus boraha—bring the tally to 24 species. Scientists ID’d the newcomers using statistical modeling that allowed them to pin down genetic differences between individuals.

Mouse lemurs are tiny and nocturnal, and live in remote areas. This makes it a challenge to study these “enigmatic primates,” the scientists noted in the journal Molecular Ecology. It’s worth the effort to understand these elusive creatures, though. Habitat loss has made lemurs a very vulnerable group, with 94 percent in danger of extinction, according to the IUCN Red List.