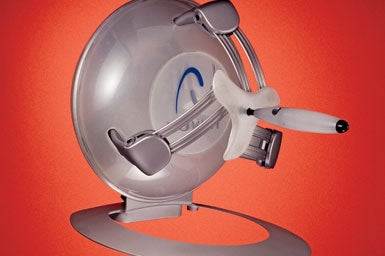 The Novint Falcon is the first 3-D touch game controller.

There´s a reason you´re such a klutz when lopping off the head of a virtual ogre: You can´t feel what you´re doing. But game players will soon be able to get their hands on virtual-touch technology initially developed by Sandia National Laboratories and once reserved for such costly equipment as surgical simulators used to train medical residents. Novint Technologies´s desktop Falcon controller (novint.com), which will cost about $100, is the first interactive 3-D touch device for the home PC. It´s far more sophisticated than the joy-buzzer â€force-feedbackâ€ effect in today´s console controllers. The user maneuvers along three axes using a stylus mounted to three articulating arms. Software tracks the tip of the stylus, calculates its force and direction 1,000 times per second, and actuates a motor at each arm with varying amounts of current. The resulting resistance lets you feel the change in heft as you raise and lower your sword, for instance. Novint plans to introduce this computer peripheral early next year, with a console version to follow. But CEO Tom Anderson isn´t targeting merely gamers. “We called this the Falcon,” he says, “because the falcon is a predator to the mouse.”