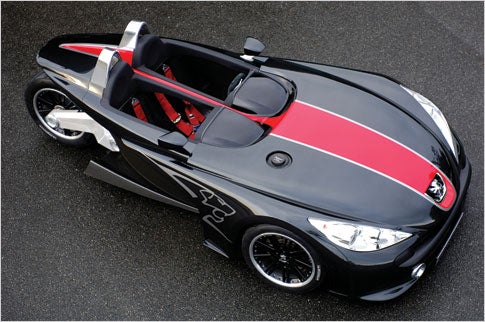 Talk about a dream job. A handful of lucky engineers just outside Paris earn their euros creating wild concept cars for Peugeot, and their only imperative is to advance the state of automotive design. While dreaming up their latest project, they hit upon a radical way to skim weight: ditch the vehicle’s rear end. Specifically, they eliminated one of the wheels and all the accompanying components, including suspension, brakes, and the actual body around it. The result, dubbed the 20Cup (“two-oh cup”), is a 1,279-pound three-wheeler that carries just 20 percent of its weight in the rear.

This arrangement actually gives the car better cornering grip than any production vehicle. And although the three-wheeled setup won’t make it to the showroom, the aerodynamic shape and 154-pound carbon-fiber chassis could influence future vehicles. Its petite engine doesn’t crank out racecar power, but given the 20Cup’s weight, about 700 pounds less than the famously lightweight Lotus Elise, speed is not a problem. The 20Cup has a better power-to-weight ratio than the street rocket Porsche 911 Carrera S. In preliminary tests it hit 62 mph in 5.2 seconds, which Peugeot says isn’t close to demonstrating the car’s true performance.

So is there a three-wheeler in your future? Not likely. Removing all that weight from the rear makes for an unusual driving experience; the 20Cup can spin like a top around its front end. That’s great for taking sharp turns, but only once you know what you’re doing. “You basically have to learn a new way to drive to make it around a corner safely,” says chief designer Jean-Christophe Bolle-Reddat, one of the few people who have driven the 20Cup and, for that matter, one of the lucky few who ever will.