2015 Detroit Auto Show: You Might Be Able To Buy 3-D–Printed Cars In A Year 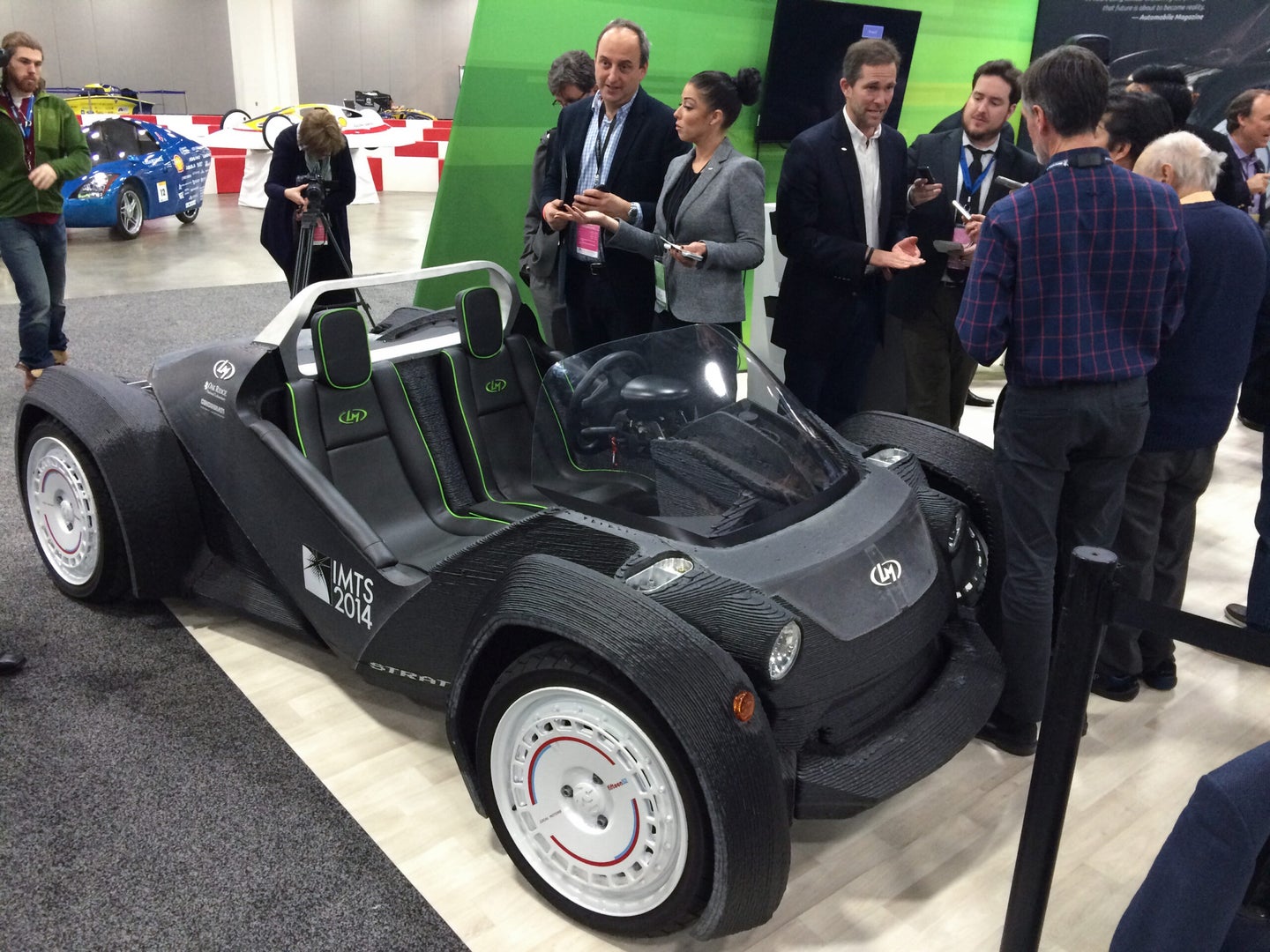 Local Motors, a Phoenix-based start-up that aims to be the world’s first producer of 3-D–printed cars, plans to start selling its unconventional vehicles within 12 to 18 months.

To bolster its claim, the company is pulling a curious stunt here at the 2015 North American International Auto Show: It’s building what it calls a “micro-factory,” consisting of a large 3-D printer and CNC machine, on the show floor to piece together an electric vehicle in front of attendees. The process began on Monday and the car should be finished by the end of the week. Once it’s done, attendees will be able to test-drive the machine on a closed track.

“We make our cars in a three-part process, and one of the exciting things about it is the speed to which we can bring manufacturing of vehicles to reality,” said John Rogers, Jr., co-founder and CEO of Local Motors, during a press conference at the show.

The vehicle being printed at the Detroit auto show, which opens to the public on Saturday, Jan. 17, is an updated version of Local Motors’ low-speed electric vehicle. The model’s name, Strati, means “layers” in Italian and refers to the 3-D–printing process where successive layers of material are laid down under computer control. In this case, the material is carbon-fiber-reinforced thermoplastic. The new car is a redesign of Local Motors’ original vehicle with subtle changes, consisting of different headlight housings, a larger front bumper, and other tweaks to give it a more sophisticated look. 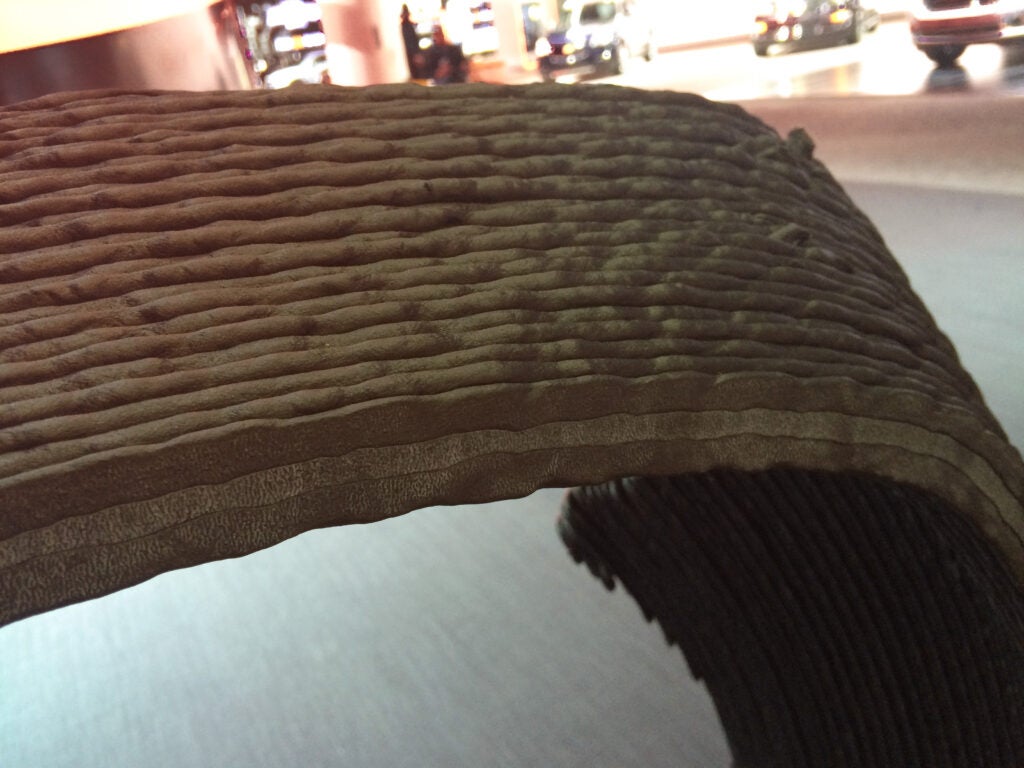 Local Motors also announced that it’s opening two new micro-factories: one at National Harbor, a waterfront development just outside of Washington D.C., and another in Knoxville, Tenn., to be operated in conjunction with Oak Ridge National Laboratory, one of the largest science and energy laboratories in the United States.

Today only one micro-factory exists, at Local Motors’ headquarters in Phoenix, Ariz. Local Motors intends for the National Harbor factory to be the first to manufacture and sell 3-D–printed cars to consumers. The company said it will break ground this fall and start filling orders shortly thereafter.

A Local Motors micro-factory is about 40,000 square-feet, which is a fraction of the size of an automotive manufacturing facility. It includes a laboratory, a build floor for light assembly of vehicles and other products, and a showroom and retail store.

“We like to think about it as Build-a-Bear mashed up with Ikea mashed up with with Formula One,” Rogers said. The long-term goal is to locate all micro-factories within 100 miles of major urban centers to create local jobs, and reduce auto freight and distribution costs by 97 percent, relative to what most automakers typically pay. 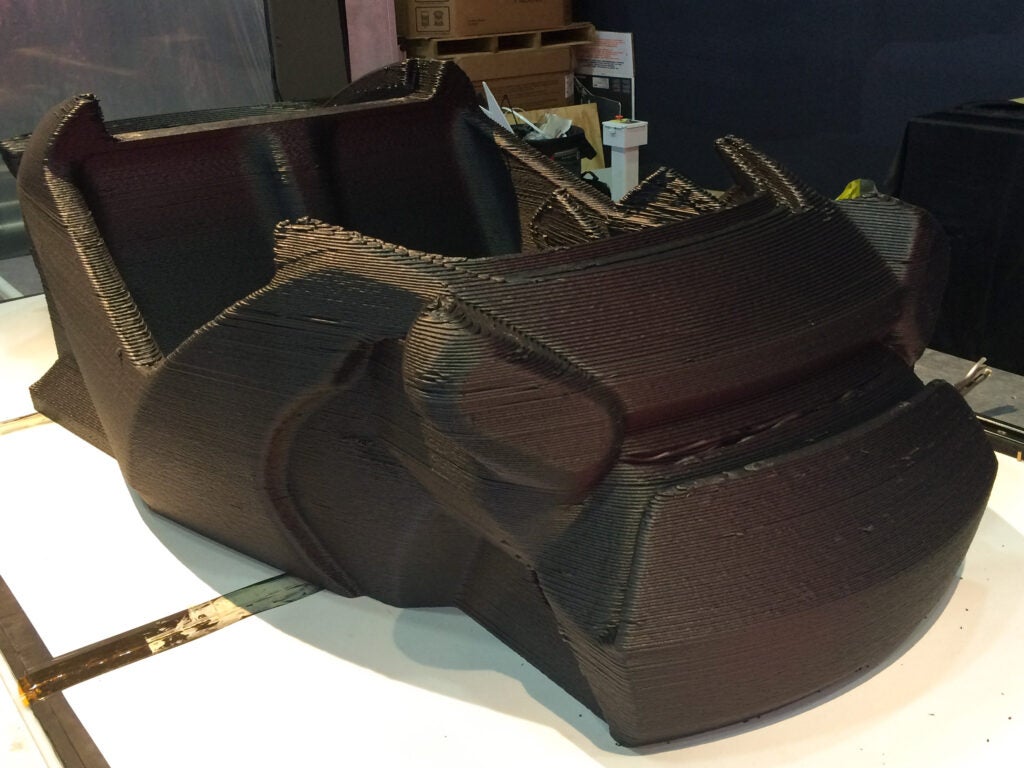 Currently, the Strati takes about 44 hours and 212 layers to fully print. Only the body structure of the vehicle is actually made through 3-D printing; the electric drivetrain (sourced from a Renault Twizy), seats, gauges, wiring, and tires are added to the body after it’s printed and milled. Rogers told Popular Science he expects to reduce the print time down to 12 hours through coming efficiencies in 3-D printing technology and software.

The production vehicle will be different than the Strati and cost between $18,000 and $30,000 when it goes on sale in 12 to 18 months. The final version might not feature the Renault Twizy drivetrain.

“We’ve been approached by more than 20 suppliers, so we are evaluating which drivetrains we will be offering,” a spokesperson said.

Initially, it will be classified as a neighborhood electric vehicle, or NEV, limited to driving on roads with posted speed limits of 45 miles per hour or less.

Local Motors is seeking approval from the National Highway Traffic Safety Administration for highway-capable vehicles, a process that is both time- and resource-intensive.

Integral to Local Motors’ strategy is an open-source approach to automotive design, which is virtually unheard of in the auto industry. The Strati’s design, for example, was chosen from more than 200 proposals submitted online.

It’s a process that Rogers calls “co-creation.” Nissan and other automakers have dabbled in co-creating concept cars, but more for the purposes of marketing and research than outright design and engineering exercises.